Driving Ms. Daisy Down the Amazon (Part 4 of 7)

As we last left our star, he was headed West up the mighty Amazon in search of El Dorado, or any opportunity to get off this nightmare of a boat ride.

We just left the immigration triangle of Leticia, Tabatinga and Santa Rosa, and like my father did on family trips when we were all at his mercy in the boat of a Cadillac, we, “needed to make just 1 more stop and then we would be off.”

We stopped every 15 minutes to upload a pig, download a peasant, or drop off a single letter 30 minutes up a random tributary. Efficiency at its finest. This was not to painful in the beginning, but as 8 hours (advertised duration) would turn into 13, every stop would appear on my horizon and I would mentally calculate if this outpost could possibly be big enough to be Iquitos, not really knowing for sure until a transaction was completed and we headed, defeated, the 30 minutes it takes to get back to the main river and continue West. 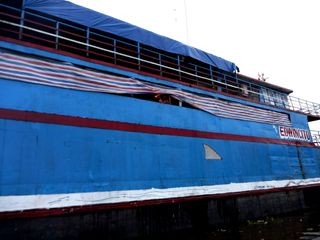 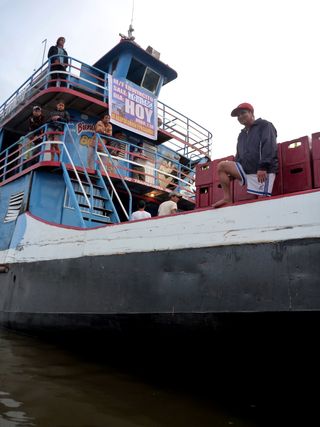 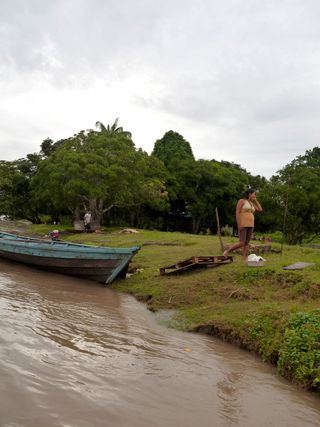 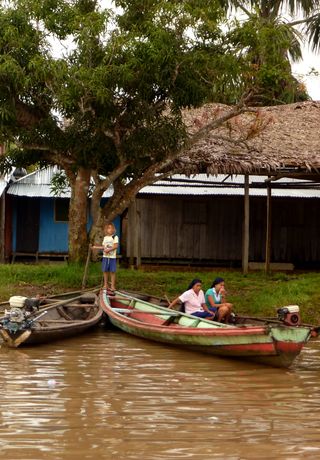 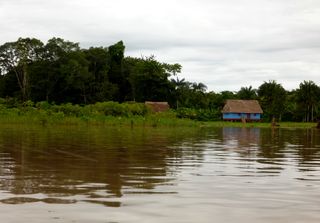 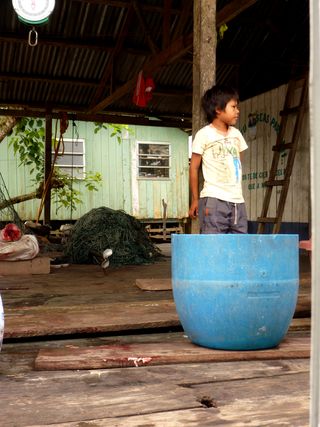 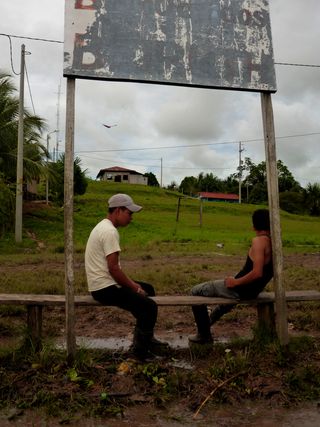 We did make a stop at a army outpost where a bunch of soldiers boarded, checking passports and looking through luggage. Scratch the fast boat off my drug smuggling route. 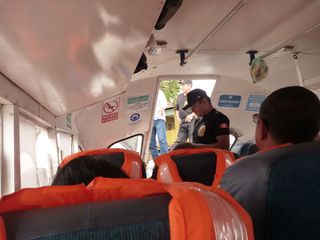 I was having a tough time sleeping and really had to use the bathroom around hour 10. I was quite surprised to hear rumors of a bathroom in the back. I got up to investigate thinking I would probably find a door marked toilet with just a plank of wood that extended off the side of the boat. Here is what I found Fairly modern. A hose was sucking water out of the river, with the toilet in constant flush mode. I somehow maneuvered a way to relieve my bladder. Thank you for making me a boy.  The health codes and water treatment facilities are a bit less organized then most Western empires. I guess since the Amazon is so big, it can deal with the sewage problem.

I returned to my seat and was actually provided a decent meal. No how come this little boat operation in the Amazon can manage meal service, but I can’t get as much as a glass of water on the US legs of travel? 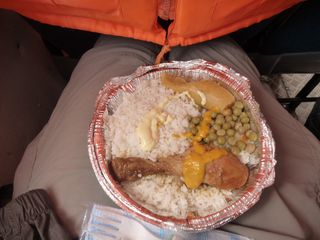 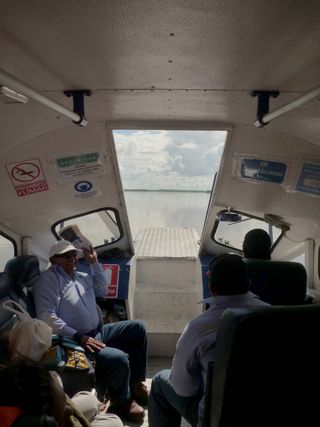 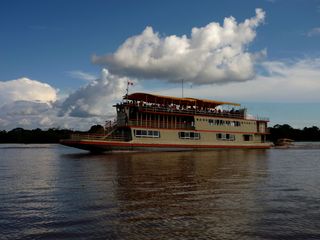 Eventually we arrive in Iquitos and as I emerged from this phallic-shaped vessel below. I was baragged with offers for transportation like George Clooney stepping out of his limo at the Oscars.

I was planning on catching a taxi once I got away from the boat, set up a perimeter around myself, allowing a few minutes to get my bearings, but word traveled that the company I hired the guide through was looking for me. We united and were off to downtown and the expedition office. 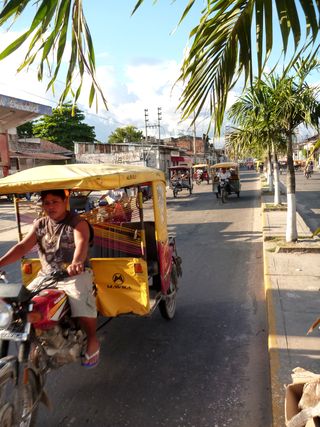 I believe a few words about Iquitos would be apropo at this juncture.  Iquitos, city in the Peruvian rainforest is touted as the largest city in the world with no road access. Iquitos was known for its rubber industry through the rubber boom of the first decade of the 20th century; it attracted thousands of immigrants from around the world. The rise of the automobile and related industries had dramatically increased the worldwide demand for rubber. Iquitos created many rubber-barons, like fictionalized Fitzcarraldo (immortalized in a Werner Herzog film of the early 80s). The bottom dropped out when someone smuggled some trees out, making the long trip to the Amazon unneseccary. A number of buildings constructed during the rubber era, many adorned with ceramic tiles imported from Portugal and Italy, remain in use in central Iquitos, especially along the old riverfront called the Malecon Tarapaca. 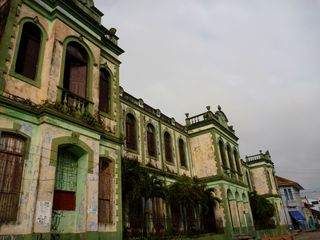 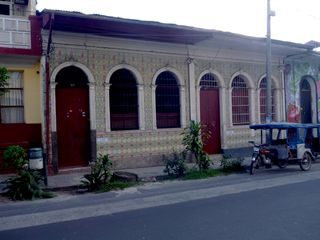 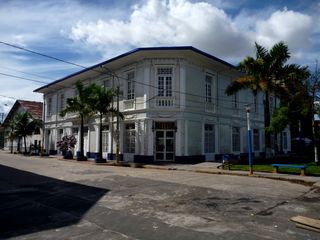 Iquitos survived by becoming important in the shipment of lumber from the Amazon Rainforest to the outside world. Other industries include oil, rum and beer and camu-camu cultivation. Camu-camu fruit contain 45% more vitamin C than oranges.

Below is a house made out of sheets of iron. It is called Casa de Fierro 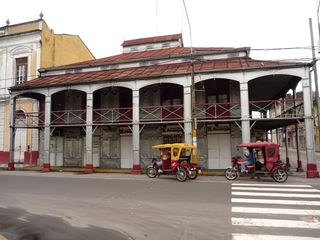 It is said to have been imported by a rubber baron who purchased it from the French architect Gustave Eiffel. I have heard this architect also built a Tower in Paris, but I refuse to believe it until I see some pictures which have not been photoshopped.

Back to our story.  I arrived at Maniti Expeditions headquarters to meet the owner, Guido Julca. I am horrible with names, so I must associate the word with something, or it is lost into the cavity where my brain should be. So, in order to remember Guido, I had to think of Greedo, a bounty Hunter from Star Wars. 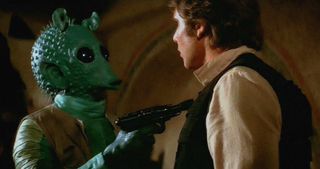 If unfamiliar, here is a picture where he is having a discussion with Han Solo over dumping Jabba’s cargo at the first sign of Imperial forces. To be fair to Han, I would probably have done the same thing, but that is discussion for another time, best had in my parent’s basement with a 12-sided die in one hand and a Fresca in the other.

It was unfortunate for Guido as he was much better looking than Greedo, but we can not always choose how we are perceived by others.

I left briefly with his right-hand man to find an ATM to collect about 1,100 Soles for the balance of payment on my trip. After settling up, discussing the plan of leaving early tomorrow after meeting my guide, I dropped my bags in their dorm room and followed a recommendation to a Crocodile dinner 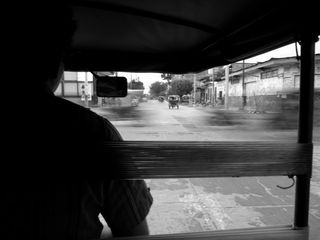 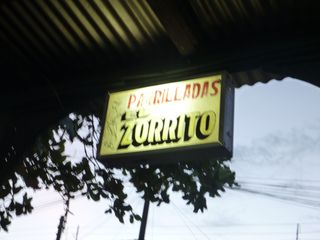 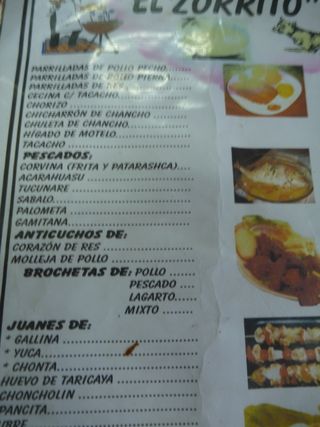 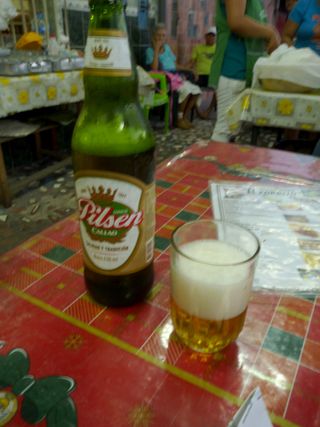 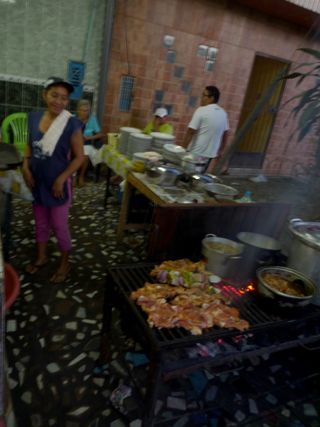 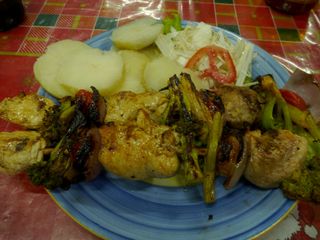 Like most things foreign, it tasted like chicken. I had to scarf my food down, as at my feet, an Amazon Cheetah was ready to pounce on my recent kill 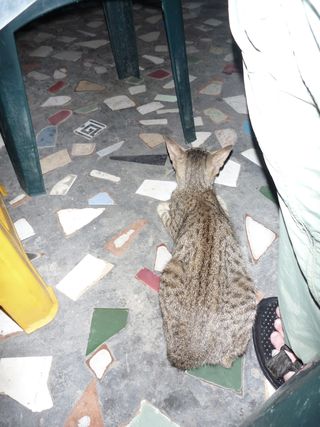 I walked the streets a bit 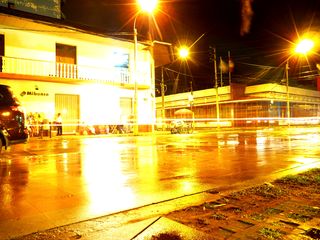 Finding a place to make international calls. I wanted to call home and let everyone I was alive, but I had never made an international call from a public phone, or what I though was a public phone. I walked into a room and there was a bank of phones on the wall. I picked one up and dialed my parents number as if I was calling from down the street, I don’t know why I thought that might work. I knew I had to pay somehow but could not figure out how. I tried dialing zero to call collect, even tried to get through to my international calling card. No such luck. I went to the lady at the booth, who did not speak English, and tried to convey that I did not know what to do. After about 5 minutes, I tried to convince her to come from behind the booth and do it for me. I am the type of guy that has no problem asking directions at the first sign of doubt. She would not leave her booth. I eventually put it all together. In some grand scheme to actually turn a profit, the lady was representing a phone operation similar to an Internet café, where I would be ushered to a phone, and could in fact dial direct (assuming I used correct USA code) and pay her when done.  I felt like an ass, per usual.

I made some calls, and remembered it would probably be a good idea to call my bank and tell them I indeed was in Iquitos and those 3 recent large ATM withdraws were legit.

I was put in touch with an Indian (dot not feather) named Ralph and tried to convey the message. I was asked to list my recent transactions and somehow forgot one and Ralph shut my card down. WTF! Like if I had stolen the card I was gunna call the bank and try to get them to leave it open. Actually, that is a pretty ballzy play for a would-be thief. Anyway, that sucked. I fortunately had another account and card and headed off to a bar to destress.

I stopped at the only bar that looked active on this downpour of a night. It was called The Yellow Rose of Texas. Pretty Authentic to Iquitos I am sure.  All the waitress were dressed as Texas cheerleaders. Funny to me, but I am sure fullyy degrading to the locals working there This bar was owned by your typical Texan who still feels that Texas is only temporarily a member of the United States, considering themselves more if a commonwealth like Puerto Rico. His walls were littered with everything Texas. Pictures of him with the Bush family, next to sticker of Calvin pissing on Obama.  I sat outside and ran into a some guys from Canada who were there as oil consultants 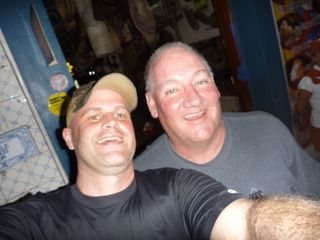 Apparently there is tons of oil in the Amazon. Peru is able to refine it and transport it, but is not doing a good job of finding it. For that they hire some of the major oil companies to come down with there divining rods and tell them where to dig.

These guys were off to play golf on some par 3 course the next day, but were pumped for some late night massages they were to receive in their 5 star hotel later that evening.  They explained how they had flown in the previous day. I looked down on them while detailing my epic struggle for survival as I bushwacked through Colombia and had only recently arrived after a grueling 13 hr canoe ride, brimming with close calls from Maneaters and Headshrinkers.

I headed back to the dorm around 11pm and was asleep by midnight. At 1am I was awakened by new arrivals. Apparently a slow boat had come in over night and a group of dope smoking, hemp-wearing, ball juggling hippies settled on my dorm room for lodging. They turned on all the lights and made a huge racket. It has been a long time since I felt the rage rush over me that night, but it took everything I had to not start throwing haymakers. I despise people interupputing my sleep due to a simple lack of respect. It has caused me to usually opt for private rooms in these situations. At home, in the hospital, where I work nights, I tiptoe around my patient’s rooms without making a sound to the point where I cant barely see where or with what I am sticking them.  (To my manager who may be reading this; I am joking. Of course I am doing at least 3 or 4 of the 5 or 6 Rights of proper administration).

I fell back to sleep eventually. Tomorrow the ride into the jungle begins. I know I have been teasing you for 4 days, but you are so so close now. Besides, the journey is the destination.

(Link to All Trip Pictures)